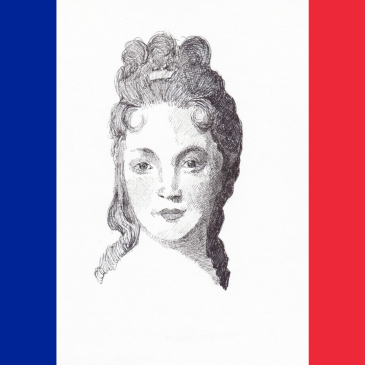 Right around the beginning of the eighteenth century, a change was beginning to happen in the music of France. The graceful dance suite of Lully’s time, so beloved by the late Louis XIV, was slowly being supplanted by the Italian sonata. The great Italian composer and violinist Arcangelo Corelli had enriched and expanded the capabilities of the violin. His collections of sonatas had become staples in the repertoire of every violinist in Europe, and his students had become the dominant violinists of Italy. Many French violinists and other musicians traveled to Italy to study with the great masters, then returned to France, bringing with them Italian aesthetics and musical forms. As a result, the solo music written for violin gradually shifted towards the Corellian sonata, while still retaining the sublimely intricate and delicate ideas of the French Baroque. This program shows the gradual development of the genre of the French violin sonata.

Jean-Féry Rebel (1666-1747) was the son of a singer, employed in the French court. He studied violin and composition with Jean-Baptiste Lully, who soon granted him a position in the Opera and in the 24 Violons du Roy. He soon became the concertmaster of both groups. He dedicated many of his sonatas to his powerful patrons, including a Tombeau for his teacher Lully, who died tragically of gangrene in 1687. Upon the death of Louis XIV, Rebel gained the title of court composer for Louis XV, and soon after directed the Concert Spirituel, a concert series of sacred music for performance during Lent, when the Opera was closed. As Rebel grew older, he gave his positions as a court musician to his son François, also a talented violinist. He edited and published his compositions in collections later in life.

His second collection of violin pieces, published in 1713, was surprisingly forward-looking, resembling more the Italian sonatas of the late Baroque than the dance suites of his French contemporaries. They feature four individual movements which are not dances, each a complete idea. Today’s program features the second of this set, in G major.

François Bouvard (1683-1760) as a child was a very gifted singer, and sang in the Opera in Paris from a young age until his voice broke. After that he spent some time training in Italy before returning to Paris as a composer. He wrote two operas and a number of smaller publications before returning to Italy in 1711. Though it is unknown what he did there, he apparently became a count of St. John Lateran, a title he referred to in his subsequent publications. By 1723 he returned to Paris, where he continued publishing music until 1750. After that he fell into ill health and died a pauper.

Bouvard’s 8 violin sonatas were published in 1723, upon his return from Italy. Similar to Leclair’s earlier that year, Bouvard’s sonatas show a mix of Italian and French styles. His movements have Italian names but French delicacy and character, and there are five of them, labeled Adagio, Largo, Allegro, Largo and Prestissimo.

Jean-Marie Leclair (1697-1764) was born in Lyons, and trained as a child in violin, dancing and lacemaking. As a young man, he traveled to Turin, where he took lessons with the great Italian violinist Giovanni Battista Somis. He traveled to Paris at least twice to publish collections of violin sonatas. Finally in 1733 he was appointed ordinaire de la musique du roi to Louis XV. By 1737, though, he quarreled with another violinist, Pierre Guignon, and left the court rather than having to work under him. He was quickly hired by the court at Orange in the Netherlands, where he spent five years before returning to Paris. He then spent the next few years in the service of the Duc de Gramont, a former pupil. In 1764 he was murdered, apparently by his nephew, violinist Guillame-François Vial. His legacy remains as one of the first great violinists and composers for the violin in France.

His violin sonatas are influenced heavily by those of Arcangelo Corelli and his Italian contemporaries, but with a distinctive French sound, mixing the two styles into what would become the standard for French violin writing in the early 18th century. Today’s program features the third sonata from Leclair’s op. 1 collection, published in 1723.

François Francoeur (1698-1787) was born into a musical family, as his father Joseph played bass violin (cello) in the 24 violons du roi. He and his older brother Louis both excelled at the violin, and quickly gained spots in the Opera, in the Musique de la Chambre du Roi and in the 24 violons. There he met and started working with François Rebel, the son of Jean-Féry. The two violinists became close friends and worked together for their entire careers until Rebel’s death in 1775. By 1739 Francoeur was the master of the Opera, and he and Rebel joint-composed several operas. Though his career at the Opera was full of major successes and major failures, his work was recognized to the point where Louis XV raised him to the rank of nobility in 1764. He continued composing for the Opera until his retirement following the death of his friend Rebel.

Francoeur published two books of violin sonatas in 1720, right when he received the royal privilege to publish music. His sonatas are more in keeping with the French style, featuring five dance movements rather than the typical four of an Italian sonata da chiesa. Today’s program features the second sonata of op.1. It contains a dark Adagio, an Allemande, a Sarabande, a Rondeau and a Presto last movement.

Elisabeth Jacquet de la Guerre (1665-1729) was born to the Jacquet family, a family of musicians. By the age of 5 she was adopted into the household of Madame de Montespan, Louis XIV’s most famous mistress, and sang and played harpsichord for the court until 1684, when she left the court to marry the organist Marin de la Guerre. She was given the Royal Privilege to compose and publish music, a rare honor in France, and was the first French woman to compose operas. She also published two volumes of cantatas, two volumes of keyboard music and one book each of solo and trio sonatas for the violin. Her works are revolutionary and forward-thinking, combining the Italian styles of her teachers with the tastes of the French high Baroque.

Her six violin sonatas were published inside her second volume of keyboard pieces, in 1707. They are some of the earliest and most celebrated French violin solo pieces. They are composed in the Italian style, with different movements with contrasting tempos, rather than in the French suite of dances that was popular at the time. Sonata 2 is in D major, though it freely changes from major to minor between movements. One of the shortest sonatas of this set, it has four movements, Presto, Largo, Presto and Presto.